About the Supreme Court

About the Supreme Court


The Court holds the highest judicial power in Iceland, where the court system has three levels. The Court was housed at first in the Old Penitentiary Building on Skólavördustígur in Reykjavík, but from 1949 it resided in the former court building on Lindargata.


The Minister of Justice dug the first spade of ground for the new Courthouse of the Supreme Court of Iceland at Arnarhóll on 15 July 1994, laid the cornerstone of the building on the Court’s 75th anniversary, 16 February 1995, and handed it over to the Court for use on 5 September 1996.


The architects of the Courthouse are Margrét Hardardóttir and Steve Christer of Studio Grandi, Reykjavík. Their design won the first prize in a competition held in 1993 for a new Supreme Court building, where the selection committee received 40 entries.


Since 1 January 1999, the Supreme Court of Iceland has maintained a home page on the Internet. Diverse information is published there about the Court and its tasks. The judgments of the Supreme Court are published on the home page as soon as they have been pronounced, together with the judgments which were subject to review. The judgments are published free of charge for the primary purpose of making them available to attorneys and to the public, as becomes the needs of a democratic state.


A summary of the history of the court system of Iceland can also be viewed there among other pertinent information. The path to the home page is www.haestirettur.is. 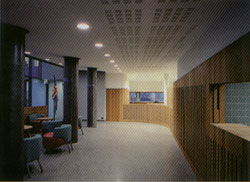 The position of Secretary General in its present form was established by the Judicature Act No. 15/1998, now 50/2016, replacing a similar position as defined under the previous law on the Court. The first Secretary General of the Supreme Court was Dr. Björn Thórdarson, later a judge and County Commissioner in Reykjavik and Prime Minister of Iceland.

A ramp leads from the lobby to the courtrooms of the building.

Some see the hallway as a reminder that in ancient times, people walked to court at the Althingi through the Almannagjá Rift at the ancient parliament site of Thingvellir. 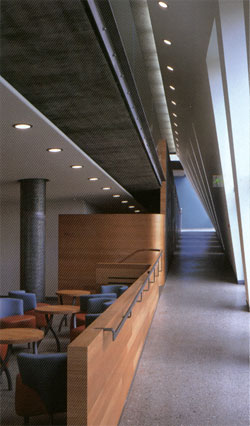 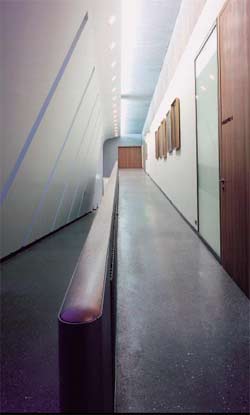 A look up the ramp from the larger courtroom toward the smaller courtroom, the conference chamber and the office of the President of the Supreme Court.

To the right there are paintings of the first justices of the Supreme Court, Kristján Jónsson, President of the Court, Halldór Daníelsson, Eggert Briem, Lárus H. Bjarnason and Páll Einarsson.

The first three men had been the judges of the National High Court, which operated throughout the 19th century but was abolished with the founding of the Supreme Court of Iceland in 1920.

The National High Court was the second judicial level in Iceland, but its judgements could be appealed to the Supreme Court of Denmark in Copenhagen. 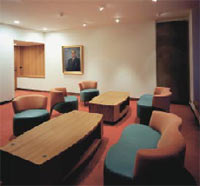 Farther along, a painting of Dr. Einar Arnórsson, Supreme Court Justice 1932-1945, can be seen. He twice held the position of a government minister, the first time as Minister of Iceland 1915-1917, the same as President Kristján Jónsson had been in the years 1911-1912. The second time, Dr. Arnórsson was the Minister of Justice and Minister of Culture and Education in the extraparliamentary government of Dr. Björn Thórdarson, 1942-1944.

Dr. Arnórsson had further been a Member of Parliament, an editor of the daily newspaper Morgunbladid, a Tax Commissioner of Reykjavik and a professor at the University of Iceland when he acceded to the bench of the Supreme Court. This room provides facilities for the attorneys to the Court, and next to it, there are two small offices that the attorneys can utilise to confer with their clients. Before the oral presentation of a case begins, the attorneys don their robes that are here stored in special closets. The robes are black with blue lapels. Attorneys can also enjoy a quiet moment here during a recess in case hearings.

On the wall is a painting of Lárus Jóhannesson, Supreme Court Justice 1960-1964, who previously had practised litigation for nearly four decades and served as Chairman of the Icelandic Bar Association for 13 years.
The Supreme Court of Iceland operates in one division, where five justices sit to hear a case before the Court, while there are eight justices altogether.

For especially important cases, the President may decide that the bench be constituted by seven justices. These shall usually be the most senior justices on the Court.

The main rule is that cases are presented orally before the Supreme Court, and the court sessions, which begin at 9 a.m., are generally open to the public.


The President of the Supreme Court presides over the session or, in his absence, the Vice- President. If neither of them is hearing the case, the most senior justice in session will preside.

The attorney for the appellant or the prosecutor in a criminal case is seated to the right of the bench, and the attorney for the respondent or the defender of an accused sits to the left. The former will begin the presentation of the case after the President has declared the court in session and the assistant of the justices has announced the case. Each presenting party has the right to speak twice, but the President may limit their speaking time.

Judgments of the Court in orally presented cases are pronounced in the courtroom at a fixed time at Wednesday or on another day of the week if Wednesday is a holiday. Following pronouncement, all judgments of the Supreme Court are published on the home page of the Court along with the respective judgments under appeal. Until 2006, they were also issued in printed form. 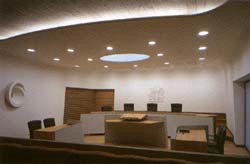 A work of art in glass by the artist Leifur Breidfjörd decorates the courtroom. The work displays citations from the ancient code of Jónsbók on the duties of judges and from Njáls Saga on the oaths of advocates, both in prosecution and defence.
The following words also come from the latter: “It is not in breach of settlement”, said Njáll, “for each to seek the law towards the other, for with law shall our land be built but with lawlessness destroyed.”

Further, next to the entrance into the courtroom, etched in glass, are the trenchant words of Thorgeir Ljósvetningagodi upon the Christianisation of Iceland at the Althingi in the year 1000, as recorded in Ari the Learned’s Book of the Icelanders: “It will prove true that if we sunder the law in twain, we will also sunder the peace.”

“I call upon witnesses”, he said, “to the fact that I swear this oath on the book, a lawful oath, and I declare before God that I shall so prosecute this suit as I know to be most truthful and fair and consistent with the law, and that I shall fulfill all requirements of the law, as long as I am at this Thing.”
Njáls saga 142. kap.

“I call upon witnesses to the fact that I swear this oath on the book, a lawful oath, and I declare before God that I shall so defend this suit as I know to be most truthful and fair and consistent with the law and that I shall fulfill all requirements of the law which pertain to me, as long as I am at this Thing.”
Njáls saga 143. kap.

“Mercy will safeguard that judgments be not tainted by wrath or cruelty. Truth must be preserved so that no lie be borne forth. Justice shall safeguard that a true judgement be not slanted by iniquity. Amity must prevail until a true judgement is handed down, so that an intense sentence will not be rendered in anger. And judges should mind these for the reason that they will prove the more beneficial the more keenly they are pursued in all courts.”
Jónsbók, Mannhelgi 17. Dómakapítuli

The office of the President of the Supreme Court is used primarily to receive guests and hold meetings, while like the other Court justices, the President has a workroom on the third floor of the Courthouse.

In the President’s office, there are many fine things that have been donated to the court.

The Minister of Justice presented this key to the President of the Supreme Court on the day that the Courthouse was inaugurated, 5 September 1996. 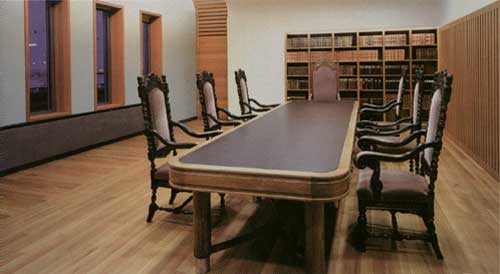 This conference chamber is the place for meetings of all the Supreme Court justices, when they discuss or decide upon matters other than the disposition of court cases. The meeting table and chairs date from the founding of the Court in 1920.

To the side are three chairs from the National High Court and a chair given by the lawyers of Iceland to Dr. Ólafur Lárusson, professor of law at the University of Iceland 1919- 1955, on his 60th birthday in 1945. Dr. Lárusson was among the reserve justices of the Supreme Court from its founding until his retirement as professor, and his time of actual service on the Court came to more than five years in all. The chair is owned by the National Museum of Iceland. 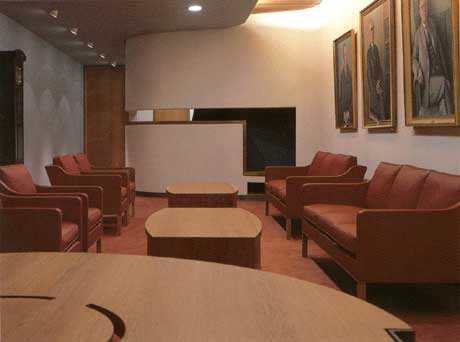 The justices gather in this lounge every morning before oral presentations begin and don their robes, blue with white lapels.

When the Supreme Court began its activities in 1920, the custom of justices and attorneys dressing in special robes for case hearings was adopted, reputedly at the suggestion of the first Supreme Court attorneys, Eggert Claessen and Sveinn Björnsson, who later was to become the first President of Iceland.

Here hang paintings of five deceased Supreme Court justices, Gizur Bergsteinsson, Dr. Thórdur Eyjólfsson, Jón Ásbjörnsson, Jónatan Hallvardsson and Einar Arnalds. The first four sat together on the Supreme Court through the years 1945-1960, along with Árni Tryggvason, and most of them held the office considerably longer.

Gizur Bergsteinsson has served the longest as a Supreme Court justice, 36 years and five months, and he was also the youngest person to be appointed to the Supreme Court at age 33. Dr. Thórdur Eyjólfsson has the second longest tenure, 30 years and three months.

The view is into the hallway on the top floor of the Courthouse. Here all the Supreme Court justices have their workrooms. 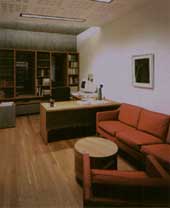 This shows the workroom of a Supreme Court justice,
which is similar to the facilities of the other justices. 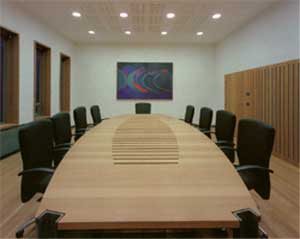 As soon as an oral case presentation is finished, the justices retire for a closed meeting to confer and vote on the disposition of the case. One justice will be responsible for introducing the matter and proposing a solution of the case, a duty shared among the justices according to an objective rule, and he will usually write the opinion of the Court.

At the meeting, this reporting justice will review the main aspects of the case and set forth his opinions on the specific points in issue, the legal arguments involved and the conclusion of the case. The other justices then will explain their views, one after the other, the President winding up the round.

If the views of the reporting justice do not have the support of a majority of the justices, the President will ask another justice to write the Court’s opinion, and the minority justices decide who will write a separate dissenting or concurring opinion.

The draft opinions are then reviewed and read over jointly at meetings of the justices, where they will attempt to harmonise their views and proposals, which sometimes requires several meetings.

Finally, a judgement will be ready, and the justices sign a single copy which is filed in the book of opinions of the Court.

There are two meeting rooms at the third floor of the Courthouse.

Both rooms have a view over the Reykjavik City Centre.